AT YOUR SERVICE: Stewart and Richard on the Latex 101 stand at the German Fetish Fair, Berlin

A decade ago, Latex 101 were two rubber-loving lads who started a hobby business selling a few home-made pieces on eBay. Today they reckon they make more latex pieces in the UK than anyone else, the workforce is a dozen strong and the label is associated with innovation such as its trademark textured latex and vibrant marbled garments. And did you know they sell women’s accessories and latex fashion too? Tony Mitchell gets the full story from founders Richard and Stewart as they prepare to exhibit at this year’s German Fetish Fair

Latex 101 and The Fetishistas share a decade of history going back to the clothing label’s debut in 2008 at London’s Barbican Expo.

A year earlier, my newly-launched online magazine had become the Expo’s media partner following the disconnection of both of us from Skin Two.

Alongside promoting the Expo with editorial coverage, The Fetishistas also produced the Expo fashion shows — where, in 2008, Latex 101 made its catwalk debut.

Since then, our paths have crossed regularly, mainly at big European fetish events like the German Fetish Fair or Fetish Evolution.

And I have watched as the clothing brand has grown in size, scope and sophistication — while never losing the friendly approachability that marked its early days.

The label’s two founders — Richard and Stewart — are a gay couple from the north of England who started out, as Richard bluntly puts it, with “no fashion background but a huge interest in latex”.

The pair had decided in 2007 that there wasn’t enough latex menswear on the market that was colourful and interesting, and they fancied having a go at putting that right.

A decade on, their success is unquestionable, and Latex 101 has put its stamp firmly on the men’s rubber fashion scene.

Today it boasts a large, well-priced, well-made clothing and accessories range that benefits enormously from its owners’ fan-like enthusiasm and willingness to invest in new materials and technology.

For the first few years of its existence, the business grew steadily without stepping too far outside the partners’ comfort zone of fairly basic men’s latex in a few colour options.

But when, around five years ago, Yummy Gummy launched its bespoke latex sheeting with multiple colourways including marbled and splatter effects, Latex 101 saw the possibility of adding a whole new level of pizzazz to its men’s styles.

What it now collectively calls its ‘marbled’ styles were an instant hit and are today a major trademark of the brand.

At around the same time as the lads took a punt on an order from Yummy Gummy, they also decided to invest in a laser cutter with a big two metre bed.

Bought initially with the aim of automating garment production, the laser cutter has subsequently been adapted to more creative uses.

The firm begun using it to etch patterns onto latex sheeting. This has resultied in Latex 101 today being as celebrated for its textured latex (it is the industry’s biggest producer) as for its vibrant ‘marbled’ styles.

With his background in IT, Richard was also intrigued by the possibility of using a 3D body scanner with the laser cutter to produce the ultimate fit and comfort in made-to-measure large garments like catsuits.

After an intense and costly year of development, the company’s 3D Future Fit system was launched at the German Fetish Fair in Berlin two years ago.

It was an immediate hit with customers. But, Richard admits, the back-end processing is currently still too time-consuming to be commercially viable, and further investment is needed to bring it properly to market.

However, another recent Latex 101 development definitely not beset by technological problems is the firm’s introduction of a women’s latex clothing range in the UK to complement its existing women’s accessory lines.

Rather than design the clothes themselves — something the partners consider to be outside their comfort zone — they approached major Netherlands-based fetish wholesaler and retailer Peter Domenie about selling his women’s latex range in the UK.

Domenie’s women’s latex is sold throughout continental Europe, but his brand is little known in the UK — other than to those who visit the big European fetish fairs where, like Latex 101, he regularly exhibits.

A deal was struck with the Dutch company that has enabled Latex 101 to become the exclusive UK outlet for a stylish women’s latex line, while staying true to its image as first and foremost a men’s label.

BEHIND THE HEADLINES:
IN THE BEGINNING

How did this pair of “nice boys from the north” progress from being back-bedroom hobbyists making shorts and tops that they sold on eBay to running the business that is Latex 101 today?

Richard (who does most of the talking) reminds me that, when the pair decided to “have a go” in 2007, the latex menswear scene in the UK was pretty small-scale.

“It consisted of three London designers — Expectations, Regulation and D-Vote (who was very new) — plus Invincible who’d been around for probably about ten years.

“Then there were the big names in the straight market — Westward Bound, Libidex, Honour — but none were focusing on men.”

I suggest that the latter three sensibly concentrated on the women’s market because women buy more stuff, while men are not very adventurous.

“No they’re not,” Richard agrees. “But we made a purposeful, conscious effort to get men more interested.”

“We went to B&Q and bought a roller cutter and a few bits and pieces, and what looked like thinners. And we bought some glue and a metre of 4D latex off a reseller (Brian at Armory) and we were just like right, we’ll give it a go then.

“Then I went on holiday without Stewart — we’d only been together about three months — and I came back to this abortion of a pair of shorts! We hadn’t bought the right materials or anything.

“We put it all under the bed, took it out again after a couple of months and thought we’d have another go.”

They finally made a pair of shorts they were “really happy with”, sent them to a mate of Stewart’s who liked rubber — “’Cos we were both just punters having a go” — and the mate liked what he saw. Says Richard:

“We did a couple of designs for these shorts, one of which was our iconic design for years, with the chequers all down the side, which we called the Racing Shorts.

Both men had full-time day jobs at the time, and were making latex in the evenings and at weekends. After about six months of trading with their eBay store, out of the blue they got their first big order.

“This guy in the States had literally bought one of everything in the shop — which was about £700’s-worth at the time,” says Richard. “And we’re like, how the fuck are we going to make this?

“There’s only us, we’re only doing evenings and weekends. So we just e-mailed him and told him it would be a few weeks but we’d get them all made.”

“We started making all this stuff, and we were thinking, there’s something in this. ’Cos we were just doing it to have a bit of extra pocket money for holidays.”

But by February 2008 they were sitting on a beach in the Maldives thinking: there’s more to this than holidays!

Richard suggested they ask Barb Domek of Birmingham Bizarre Bazaar, a fetish fair he’d been visiting as a punter since the early 2000s, if they could take a stand there.

“And she said ‘Yes, we need rubber and we definitely need menswear’. So we arranged to get a stand and said we’d do it in March ’cos we need to make some stock first.”

In order to meet the deadline, Stewart went down to working four days in his day job. Within a few months, he’d given up his job completely and was making orders the entire time — on a table no bigger than a coffee table.

“It’s still in the workshop for posterity — our first making table!” Richard adds with a grin.

“And it just kind of skyrocketed from there. With the fairs, we did not want to be pigeonholed as a gay male latex firm. But that’s quite hard when you only do men’s clothes.

“I think in our first couple of years we failed miserably not to be pigeon-holed into the gay male bracket.

“We only had products for men, we were gay, we were focusing on designing products we liked, and they were a bit gay.

“And we have still got some of the truly gayest products on the market… But I haven’t got a problem with that!”

The couple lived in Harrogate for six years and had the business there for five of those, moving house for the last two years specifically to get “a big place were we could have a big workshop”. Well, a making table in a very big bedroom anyway.

“At that point we’d got a freelancer in, working from home to help Stewart — which felt quite subversive at the time,” Richard continues.

“It felt like: that’s an interesting way to do it; wonder whether anybody else does that?

“But of course that’s how everybody bloody does it. We didn’t know anything then!”

After two years at the big house in Harrogate, Richard and Stewart moved up to Scotland. Latex 101 HQ today is in Armadale, West Lothian, halfway between Edinburgh and Glasgow, just off the M8 near Livingstone.

For some time I’d been wondereing why the business had moved even further north, and now I finally get my answer.

“I was working then in another job — and still am,” Richard explains. “I took a short IT contract [since extended] at a major Scottish bank to earn some cash which we then invested in the business. So it made sense for us to move up there.

Stewart, who has been listening quietly (as usual) while Richard does the talking, chips in: “And it was fine to move up to Scotland then because it was just me doing the making…

“…And one freelancer who was making from home,” Richard adds, before explaining:

“Stewart and I have quite complementary skills — he’s very good at the making while I’m good or better at the business side. And the theory at the time was that I could still do that in the evenings and the weekends.” 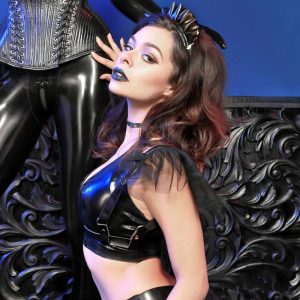 Heavy Rubber reboot: Czernich takes back his legendary mag. After the sale of Marquis to America, sister publication Heavy...