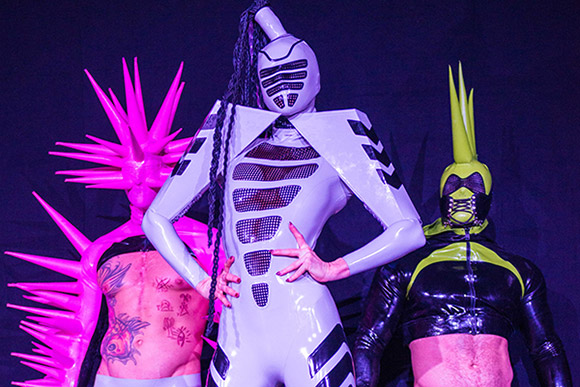 COMING UP: a report on TG Halloween 2018, with its Dayne Henderson fashion show, above (photo: Hyder Images). BANNER: Directory image of Redsky in Fantastic Rubber by Me-Chiel

Happy New Year 2019 – and maybe a job opportunity too…

If all goes according to plan, 2019 will see some welcome developments at The Fetishistas, as the brand expands with a second major website.

About time too, you might think! Regular followers could have hardly failed to notice that in the latter part of 2018, less new monthly content appeared on this site than they’d previously been accustomed to.

The reason for this was that during that period, our editorial resources were almost entirely diverted into bringing the long delayed Fetishistas Directory to the point where launch was finally feasible.

This meant reducing the time that could be spent on producing content for this, the parent site — to the point where there were a couple of months that saw us only managing to publish cover stories and no more.

For me as The Fetishistas’ publisher, editor and main content producer, this was an immensely frustrating situation to be in.

No one outside could see the long hours I plus my web designer, our WordPress developers in India and our various UK contributors were spending behind the scenes on Directory development work. But many people could see that less time was being devoted to the main site.

So I’m glad to say that The Directory is now finally in its beta testing stage, with a full official public launch scheduled for the very near future.

It will launch with well over 500 pages of content, including 300 pages devoted to global latex listings, and more than 200 pages of global events listings.

Business owners and event promoters will be able to actively participate in this important new fetish resource, by regularly updating, expanding and enhancing their own listings pages.

This means that I, at last, will be able to add more content to the main site again. And not least among the topics for discussion will be developments on the fetish events scene in the UK and further afield.

We’ll shortly be looking at the sad loss, towards the end of 2018, of two of London’s cornerstone fetish events, Club Subversion and Rubber Cult — the former forewarned, but the latter a total surprise.

We’ll also have an in-depth report — with words by Ian Dutton and pictures by Hyder Images — of Torture Garden’s debut at Studio 338 in Greenwich, which marked the club’s return to large-scale event hosting after loss of the Coronet Theatre.

Additionally, from outside the UK we’ll be bringing you photo-reports from the second Avantgardista in Munich, and from Copenhagen’s big Fetish Fashion Party organised by the people behind ManiFest.

Meanwhile, the extensive research behind the listings for our Latex Directory has given us fascinating insights into how the latex clothing industry functions globally.

Since our first listings research back in 2014, the industry has lost a substantial number of latex clothing brands that were often greatly admired for the quality of their work, but evidently unable to sustain themselves as viable businesses.

Although that list includes some big names, the vast majority of closures probably reflected the high incidence of hobby labels that, despite their ambitions, never really grew beyond their back-bedroom beginnings.

But while numerous brands young and old have bitten the dust over the last four years, the total number of businesses involved worldwide in the latex clothing and related industries has remained almost eerily consistent over the same period.

And for me, one of the most interesting facets of this industry churn is that increasingly, the new latex brands coming along today are being launched by fashion graduates.

While I’m the first to admit that there are many self-taught latex designers out there doing a fantastic job, there is no doubt that proper fashion training can give designers a real advantage when it comes to understanding not just the creative but also the business side of running a label.

One of my aims for 2019 is that The Fetishistas should better reflect this latex fashion revolution.

This site is already well-regarded for the in-depth coverage it gives to designers. And having a sister site where every legitimate latex brand can have a constant presence should do us — and them — no harm at all.

But I would like to see both sites carrying a lot more ‘newsy’ coverage of latex fashion. So I am currently looking at expanding The Fetishistas by adding fashion blog-style content to the mix. I would be looking to add a couple of short items a week (or, say, ten a month).

I see this as an opportunity for someone with writing skills, a bit of spare time, a keen interest in women’s latex fashion, and a willingness to expand their industry knowledge, to create a name for themselves as a fashion blogger/journalist within The Fetishistas environment.

Although freelance, the person I’m looking for would need to be based in the London area. They would enjoy wearing the kind of clothes they’d be writing about, quite possibly at clubs like Torture Garden, and would probably count an afternoon at Le Boutique Bazaar as an afternoon well spent.

The gig might particularly suit a fashion student or graduate with latex interests, but those are not essential prerequisites.

If you’re interested, please get in touch via our contact-us page and tell me why you might be the right person for the job!