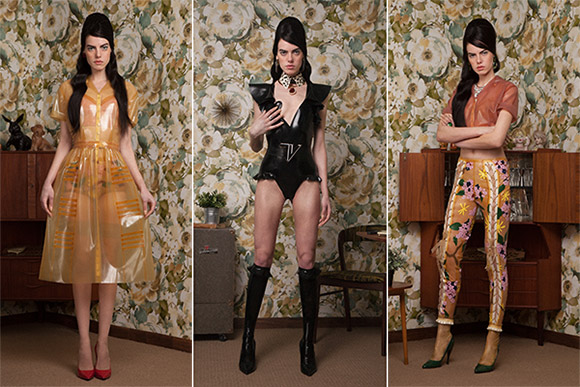 New York label Tableaux Vivants has achieved something that most latex designers can only dream of: becoming accepted as a high fashion brand.

I first saw the possibility that latex design could achieve this back in 2003, when I met a Danish trio who had just launched a label called NPNG (aka No Pain No Gain).

At that point I started to rethink my taste in latex clothes. Prior to meeting them, my wish list would have included lots of fetish archetypes such as latex nuns, nurses, corsets and catsuits.

But seeing their work was eye-opening because much of what they produced was more rooted in contemporary fashion, but made in latex, with the same finishing touches such as buttonholes and linings.

Seeing latex used in fashionable skirts and men’s dinner jackets inspired me, and expanded my knowledge of this material.

It left me wanting to see more designers explore it in a similar vein — such as NYC’s pioneering label, the now defunct Gaelyn and Cianfarani, who made waves by outfitting rap artists and performers for magazine and newspaper photo shoots.

So of course I keep a keen eye on latex when it bursts into the fashion mainstream, whether on the catwalk, or in museums, adverts, music videos or fashion magazines.

But I’m often underwhelmed by the latter, as fashion stylists tend to reach for black latex opera gloves and knickers, and not much more. And often the fetish versions of vanilla styles skimp on the details and look more like fancy dress than the original garment.

Tableaux Vivants, however, seems to have found its own niche, crafting latex pieces with attention to conventional fashion styling. By doing so it has made inroads into high fashion and in the process has helped to expand the public image of our favourite material.

Started in 2009, its founder, Brooklynite Sonia Agostino, chose the name Tableaux Vivants because to her, it meant ‘living picture’. “That’s what you should feel like in my designs,” she says. “A gorgeous living picture!”

Sonia studied fashion design at famous New York institution The Fashion Institute of Technology in the early millennium, supporting herself by working as a cigarette girl at some of the more legendary and now departed New York clubs such as Twilo, Tunnel and Limelight.

“It was there that I met a lot a great people and it’s where I got the connections into my first design jobs,” she explains. “I was working with designer Garo Sparo — making beautiful custom garments for some of the most influential people in fashion, nightlife and music.”

Her work with fashion influencers continues, and her creations have been worn by such notables as Madonna, Winona Ryder and Kylie Jenner.

The latter’s S&M-inspired shoot for Interview magazine’s cover, photographed by Steven Klein and heavily influenced by the artist Allen Jones, caused quite a stir in the media.

Showing black-latex-clad Jenner in a gold wheelchair, it was accused of insensitivity to people with disabilities.

You will also see Sonia’s collections mixed with high-end fashion and couture clothing in print magazines such as Vogue, V and Vice Magazine, which puts her near the top of the food chain and in the company of other Fetishistas favourites like Atsuko Kudo, Dawnamatrix and Vex. 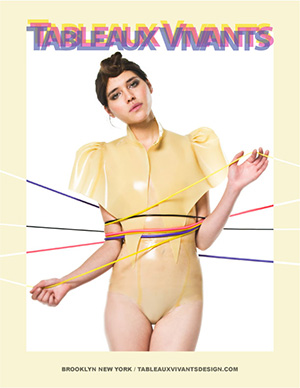 This year’s Spring/Summer 2018 Creatures Collection embraces an ’80s punk/goth/new wave vibe, especially in its lookbook stylings, and details such as zippers, slashed and lace seams and accents, peaked collars and net effects (see gallery below left).

What’s so inspiring to an admirer of high fashion such as I am, is how well-curated Tableaux Vivants collections are, and how consistent the imaging and branding are.

This cohesiveness of approach is likely an advantage gained from Sonia’s formal fashion education — a benefit not enjoyed by all latex clothing designers.

Latex fashion ranges often evolve in a more haphazard way, inspired by customers’ demands and whims as opposed to executed from scratch as part of a whole.

So naturally, I wanted to learn more about the Tableaux Vivants designer’s rise, and how she ended up embracing latex instead of working with more easily-obtainable materials.

Sonia first got to know latex when she met legendary NYC figure and latex doyenne The Baroness, who was looking to hire a new assistant.

“I knew nothing about this material, and even less about the fetish industry,” Sonia says. “That is where I learned how to work with this amazing material.

“I fell in love with it immediately and as I got better at working with it, I came to realise the immense potential that latex can have in fashion from a design perspective. It definitely takes some time to perfect the workmanship of latex.”

It’s also worth noting that the school of The Baroness also gave us Laura Petrielli-Pulice, who went on to start her own label, Vex Clothing Inc, in 1997, and whose latex is also featured often in ad campaigns and on pop stars.

Sonia Agostino is a fiercely independent woman, who credits her success to her own hard work and drive. Asked what can inspire a collection, she says:

“I don’t have a main source of inspiration. It is ever-evolving. Concepts flow in and things are put together organically.

“The inspiration can be a something I’ve thought about or a colour combo I saw years ago, and it becomes relevant in a collection years later. From the mind bank, if you will.

“I have found great vintage pieces where I re-did the pattern and made them in latex. The update on the material is a game changer. Latex can look so elevated and beautiful in complex garment designs.” 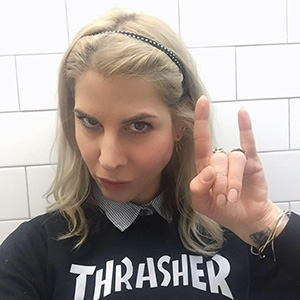 I often ask designers about their dream client, and Sonia’s response to this question is unique. She says: “I am creating for my dream customers on a regular basis — there is no typical Tableaux Vivants client.

“They are all types of people in a variety of backgrounds and lifestyles. I love that! The main thing they all might have in common is the desire to style themselves in something different that you can’t just pick up in any store.

“You have to seek out to purchase Tableaux Vivants. It’s custom-made to order. My customers are definitely interested in fashion and art and want something different.”

Latex designers in the US are often at a disadvantage simply because the two major suppliers of sheet latex both ship from the UK. This can result in US latex designers having to scramble to fulfil last-minute commissions from magazines or performers, or customers with a tight deadline.

Often, getting the latex sheeting needed requires reaching out to other crafters closer to home, or paying the onerous cost of expedited shipping from the UK.

Unfortunately, even in her prominent position in the latex fashion hierarchy, Sonia admits she has yet to overcome this particular hassle.

“Sourcing latex has been somewhat of a problem. I have yet to find a good source for latex in the US. I get all of my latex in the UK. I get my adhesive specially made for me in Germany. Quality materials are of the utmost importance for me”.

This in part explains why her garments are at “higher price points” (to use her own words). “Not only is each piece handmade, but they are made with top-of-the-line materials” which must be sourced from overseas.

One frustration I’ve observed that often vexes smaller latex designers and models, but seems unavoidable even for higher-profile lines, is the concept of working for free, or having your prices negotiated down.

Being near the heart of a major fashion centre such as Manhattan brings the same type of problems, Sonia reveals.

“People feel that it is okay to negotiate the price of garments and/or expect to have things handed to them or made for no charge — just because they are famous or, better yet, because they will ‘tag me’ on Instagram.

“News flash: your tags don’t pay my bills. If you are a known famous millionaire, I bet you could probably pay for a handmade beautiful garment, and continue to boost the creativity and means of other artists who are trying to survive.

“That’s real. I mean, who would go into a Gucci store and start to negotiate on the price of an item they would like to buy. No — that’s ridiculous! Same rule applies here.”

Sadly, this seems to be a constant for almost anybody working in a creative industry, and in particular for the more prominent latex designers, who can struggle with stylists and getting clothing back.

Featured in this article are shots from Tableaux Vivants’ two most recent lookbooks — the retro-influenced Fall/Winter 2017 collection and this year’s Spring/Summer 2018 Creatures collection.

In the future we can look forward to Sonia focusing more on live art installations (literally tableaux vivants) using her latex as part of the displays.

“Along with that,” she adds, “I’ll be continuing to enjoy working with latex, creating new collections and growing my brand.”

And while she declines to single out any one particular achievement as her greatest Tableaux Vivants accomplishment to date, Sonia does admit to being “proud that I have been able to create a brand that is recognised for its craftsmanship and quality as well as its identity.”

BELOW: Lookbooks for TV’s SS18 and FW17 collections. Click a preview to view album/start slideshow 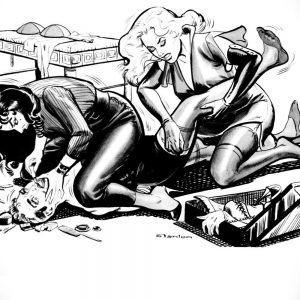 Eric Stanton and the History of the Bizarre Underground. Eric Stanton has been described as the most famous fetish artist...