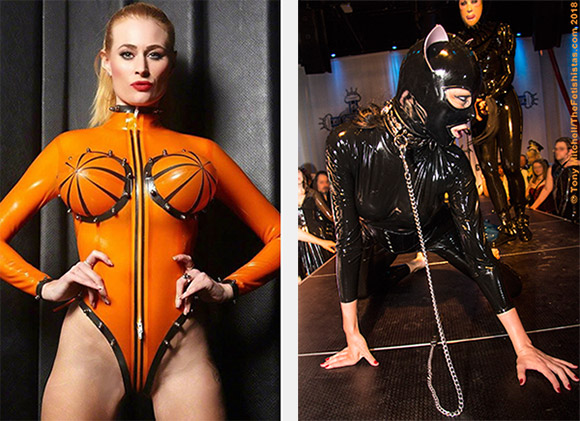 Danish party organiser ManiFest celebrated its 20th birthday in April, and Tony Mitchell was invited to Copenhagen for the celebrations. The visit also provides an opportunity to talk to hosts Stig, Stephen and Anton about their plans to give their events – including September’s big annual Fetish Fashion Party – more international appeal. Banner image by Iris Trika shows Belfry Sioux in latex by House of Harlot, which will provide one of the September party’s catwalk shows

ManiFest, the Danish fetish party organisation, was on my radar for a very long time before my very first trip to Copenhagen to attend one of its events.

Fittingly, that event is ManiFest’s 20th birthday party in April. It gives me not only a first direct taste of how pervy partying works in Denmark, but also a chance to get the inside story of this venerable fetish institution from its three principals: Stig Christensen and his associates Stephen Monaghan and Anton Antonisen.

Although April’s visit is my first time in Copenhagen, the city feels surprisingly familiar when I finally get to set foot in it.

For one thing, my hotel is just a short walk from the beautiful Marble Church (aka Frederik’s Church), a location featured prominently in Below the Surface, a Danish thriller that at this point has just finished its run on BBC TV.

My general expectations of the capital and its inhabitants have also been influenced by several friends who once lived in Copenhagen but now reside in the UK.

I will say now, upfront, that I found this compact city and its inhabitants absolutely charming.

With its beautifully preserved old buildings and eminently walkable streets (despite the cobblestones), Copenhagen reminds me of Amsterdam without the tourist hordes.

In my view this makes Copenhagen a great destination to consider for a weekend city break, especially if you can combine it with a fetish party.

The only potential downside is that Denmark’s high standard of living can make a stay in its capital seem relatively expensive. But Copenhagen is not unique in this; the same can also be said of many other capital cities.

In the course of a very relaxed post-birthday party chat with Stig, Stephen and Anton in one of Copenhagen’s innumerable coffee shops, I learn about the evolution of ManiFest from its beginnings in the 1990s.

The three are also also keen to tell me of their new ambitions to make both the bi-monthly ManiFest parties and larger, annual sister event, the Fetish Fashion Party, more international in scope.

But first some ManiFest background. Its story really begins at the start of the 1990s — not in Copenhagen, says Stig, but in London, Amsterdam and Berlin.

“We were friends travelling to those cities to go to fetish parties, because that was where the whole European scene seemed to start.

“At one Europerve party in Amsterdam, I had a stoned conversation with a French woman, who said to me, ‘Do you know what’s happening right now? We are biting the apple’.”

“I thought yeah, that’s really true. So on the way back to Copenhagen in the car, I told my friends: ‘When I get home I’ll make a company and it’s gonna be called Bite the Apple, and I’m gonna make fetish parties’.”

That was in the spring of 1995. Stig kept his word, creating Bite the Apple and hosting his first Fetish Fashion Party in August of the same year.

Stig ran the event for three years before teaming up in 1998 with Stephen Monaghan, a British expat from Cambridgeshire, and Jack Rubini, a master piercer, to create ManiFest.

“My ambition,” he explains, “was to make the Fetish Fashion Party an annual event and make ManiFest a monthly or bi-monthly fetish club for members — more intimate, not large scale.”

After a year or so doing this “with some success”, the initial partnership dissolved and Stig continued to run ManiFest and the Fetish Fashion Party as two sister — but separate — concepts.

Of the two, the Fetish Fashion Party (whose next edition is in September) seems to be the more obvious vehicle for the partners’ new international aspirations.

“But our vision is to make ManiFest grow with international guests as well,” says Stig.

After running those two concepts for many years, he explains, “I recently came to a point where I needed some new energy and new ideas to develop both concepts, but specifically ManiFest.

“So now we made a deal where Anton and Stephen are back in as associate partners.

“The deal we have now is that they are promoting three ManiFest parties a year, and I am promoting the other three parties — two ManiFests and the Fetish Fashion Party.

“And that’s where we are right now, concept-wise. Of course it’s a continuous discussion between the three of us to develop especially the ManiFest concept.

“This is really interesting because in the ’90s we were biting the apple, but now the fetish scene has developed and grown and become mature, so now we’re basically repeating ourselves.

“Now the scene is really mature, and when you’re standing in the middle of it, making a new party every second month, it’s difficult to develop it. I think we need to develop the concept to take it into the future.

“That’s why I found it important to bring in new energy and new ideas.

“That’s the challenge we’re facing now, and it applies equally to Torture Garden, German Fetish Ball, whatever. We [all] need to take it in a new direction to make it interesting.”

Stephen takes up the point: “We go to a lot of fetish parties all over Europe and have been doing that for the last 20 years. And it’s been great, so much fun.

“But then you think, OK, seen it. Who is going to bring the next level to it, the way we all felt at the start of the ’90s when we went to Europerve? We’ve been at some great parties thinking: shall we get the last bus home?”

Stig: “But I still think it’s possible to create a magical situation with the traditional recipe for a fetish party. It still has something to it — it’s still a subculture that’s very important and very giving.

Stephen: “Sometimes you’re not totally aware of what you’ve done to create the right vibe. We had this great party last year, at a venue here in the city.

“The theme to this party was hedonism, and it’s just like everything kinda fell together and there was a feeling in the room that something magical happened. We’re not sure what we did right, but we did something right!”

Stig: “All the work you’ve done melded together with the venue in a very nice way, so the venue and all the things you put into the venue made a perfect combination. That was what happened, in my view.”

Given the three associates’ apparent determination to take things to the next level, I confess that I’m slightly bemused to see that in 2018, ManiFest parties still operate on a members-only business model.

Paid membership is something rarely encountered at fetish events these days — and definitely not at events with international ambitions. So why still do it?

“It was a choice we made [at the start] mainly because we wanted two things,” Stig explains.

“The first was to tell venues this is not a public thing, this is a closed circuit. You cannot walk up off the street and buy a ticket at the door — you have to be a member and then you can pay the entrance fee if you are a member.

Stig reckons that, while ManiFest is still described today as a fetish party, over the years it has successfully “opened up the terms a little bit”.

“If we were to make a party just with hardcore fetishists it would be a very small party, because Copenhagen is a small capital city. So my idea was to attract people with a different sexual orientation.

“So you see people who have their roots in the S&M scene, who are exhibitionists, and maybe a few swingers. You don’t see just hardcore fetishists.

“But everybody buys into the concept and says, ‘OK its a fetish party, so we are gonna dress up. Even though we might not be hardcore fetishists, we will comply with the dresscode and follow that rule’.

“In my view that makes the party vibrant and interesting because you get different ideas of how to express yourself and how to behave at a party. And you also get people who want to play or express themselves in a hardcore way.”

Stig adds that the second of his two reasons for instigating paid membership was “to create a family, a community; to say you become part of something when you join this”.

This was, I agree, an admirable aim back in the day. But since the advent of social media, people don’t need to create communities that way any more.

So if ManiFest really is committed to modernising, shouldn’t dropping the paid membership now be on its agenda, at least for international attendees who might find the requirement too burdensome?

Stig reveals that for some time, people interested from abroad have been invited on FetLife to make contact by e-mail so that “we can figure something out for them”, while foreign guests invited to ManiFest have often had the membership requirement waived.

But doesn’t this still create a bureaucratic hurdle that shouldn’t be there in this day and age? To compete with other events that already attract an international crowd, wouldn’t it be better to make your events at least as easy to attend as your competitors’ are?

I should make it clear at this point that in contrast to the regular ManiFest events, the annual Fetish Fashion Party already acknowledges this and does not operate a membership policy. You just buy a ticket, observe the dresscode, and you’re good to go.

Another difference is that while the regular ManiFest parties have stage performances but rarely feature fashion shows, the Fetish Fashion Party — as you would hope from its name — always does.

Typically drawing a crowd of around 750 people, this event has been held for the last couple of years at a beautiful historic venue called Søpavillonen (Lake Pavilion) next to the lakes in Copenhagen, where it will next be staged on September 15.

“It’s very central,” says Stig, “with two floors and many small rooms so you can separate the party into different sections for different tastes. We will have the dancefloor and shows on the ground floor and other spaces on the upper floor.” 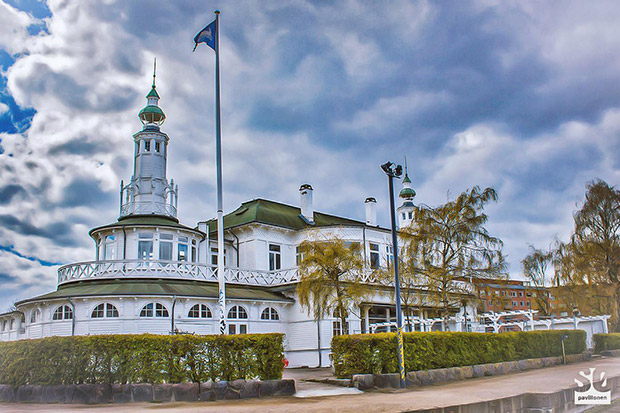 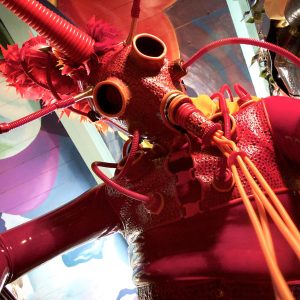