“If we get something for ‘free’ it is usually because we have worked for that designer and we get one outfit as a ‘payment’. But usually we get clothing on loan. Or a discount.

“And yes that is nice, absolutely, and I would not say no to that at all. But the problem all models have with this is that, sadly, it does not pay our bills.”

That is why it is common even at the top levels of fetish fashion modelling for models to have a day job. And it has even been suggested that, natural beauty aside, Swedish fetish models’ grasp of this economic reality explains why their country produces a disproportionate number of top class contenders in the field.

Fetish models also need to stay on top of design trends, of course. So I ask Psylocke if she’d like to namecheck some brands that have impressed her recently, and to explain what factors influence her when deciding which labels to work with.

“Hmm,” she replies, “that’s a hard question. When I do my little top list of designers, I always go with: service, quality, variety of colours they have, willingness to do made-to-measure and so on…

“But, for example, I have always admired HW-Design — a label I have also worked with a lot in the past year — for their quality of clothing, the customer service and, oh, all the colours of latex.

“And the same goes for House of Harlot/Torture Garden Clothing and Inner Sanctum. Amazing clothing, lovely people, so what’s not to like?

“In the last years I have also worked a lot with Lacing Lilith. I think he [Paul Miller] has some amazing designs — creative and good quality as well. But I’m very thankful for all the designers I have ever worked with.”

‘I completely understand when some models don’t want to do anything related to bondage. Some of the responses models get to an artsy photo involving rope can be a lot to handle’

And so we come to bondage. Psylocke has been more open than many of her contemporaries about her interests in this area, but still considers it “a very hard subject for models to deal with”.

“And when some models do bondage photos, I don’t think that they also like it in private. For some it might just be ‘another day at the office’.

“It is the same with latex. Not every model that models latex clothing is a latex fetishist. But for some fans it may be hard to understand that the models is just there modelling for a job they got paid for.

“I completely understand when some models do not want to do anything related to bondage. Some of the responses that models get when they publish an artsy photo involving rope can be a lot to handle.

“I do love bondage photos: rope/shibari photos. I don’t think I have ever thought of it as a bad thing for me — it is just an amazing capture of a moment that occurs between the people in the photo.

“I don’t think I would go to the more hardcore side of bondage and post it online. But rope suspension is a style I like, and I do want to do more photos like that.

“Sadly rope and rubber are not the best combination. But you can always use something else.

“It is always fun to mix fashion, heavy rubber and bondage into something new. Just because you have a fashion-latex dress does not mean that you cannot add some bondage into a photo.”

Psylocke’s enthusiasm for finding ways to achieve that mix in interesting and creative ways probably helps to explain why in 2013, she walked off with a major fetish award from a US contest that principally attracts (and is usually won by) North Americans.

Though a popular contestant, she didn’t get quite enough votes to be placed in the top three. But undiscouraged, she entered for the following year’s Miss Rubber World contest in New York.

“But thanks to my friend Jade Vixen, I applied, and I went over to NYC, and I won. That was just amazing!”

I recall this making a lot of Europeans and Scandinavians very proud: that a young, relatively new Swedish model could scoop this top US fetish award in a competition usually dominated by Americans.

What was her impression of the contest night itself?

“I was a bit surprised that it was much smaller than the big European events,” she confesses, “but it was like a Swedish event, so for me it was a normal-sized event.”

‘I was a bit surprised that the Miss Rubber World event was much smaller than big European events, but it was like a Swedish event, so for me it was normal-sized’

Even if its audience is not that big by European standards, the size of the prize pot for Miss Rubber World certainly makes it an attractive contest for a fetish model to enter.

And it does also offer the potential to greatly increase your profile in the host country/continent. Did that work for Psylocke?

“The fetish scene is so much bigger in Europe compared to the scene in America. And due to all the money that needs covering to fly over to the USA, it is tricky to go there; it’s not as easy as travelling to London, Amsterdam or Berlin.”

For this reason, she hasn’t (yet) embarked on the kind of extended US ‘photo shoot tour’ that some of her Swedish model pals have undertaken.

However, she agrees that “in America they do have some amazing photographers”, and says that whenever she travels, she always tries to get some photo shoots done.

“But whenever I’m travelling I’m always trying to have a vacation too. So I just pick the photographers I think I can get some amazing photos from, and to the rest I have to say no.”

And then last November she topped that by winning the coveted Miss Fetish Europe title itself — a position she holds until November 2015.

To win this prestigious European award when there is such stiff competition from Europe’s finest — including other highly regarded Swedes — was no small achievement and well-deserved.

But it wasn’t long before she was focusing on completing her next project — the relaunch of her Psylocke.se website as a pay site.

She achieved this on April 1st, just a couple of days before heading off to Essen for the annual Easter gathering of kinksters that is Fetish Evolution Weekend.

“It all started when I was in Miami and did a photo shoot with Rubberdoll,” she explains. “She asked me why I did not have a pay site.

She reveals that it took “a few years” to get it all sorted out. “Many times I just thought it was pointless so I gave it up for a few months. And then I thought ‘now or never’ — and now it is finally here.

“My plan for this site is mainly heavy rubber, latex fashion, rope and bondage photo shoots, plus videos and chat (but no video chat yet).

“Members get their own profile with their own mailbox and they can e-mail/chat with me or any other member if they like, plus they get access to all my photos and videos, previews and also backstage events footage.

“I will have photo sets and videos not just of myself but also of other co-models that will join me. I hope this will be something people can enjoy.”

You know, I think there’s just a chance that they might. 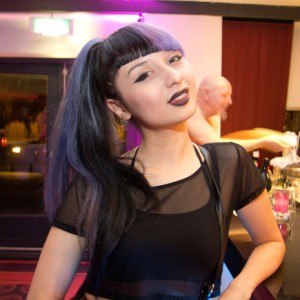 See Dead Lotus Couture at FOS – presented by The Fetishistas See the fabulous latex designs of our current cover star...