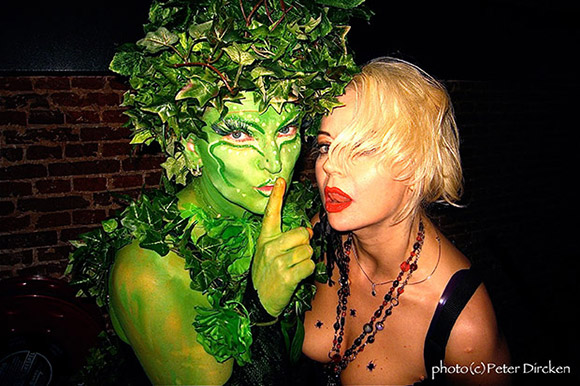 Fetish Halloween: when pervery and spookery go hand in hand.

Late October will see many of us aiming to attend one of the numerous Fetish Halloween parties organised at this time of year. Tony Mitchell provides an idea of what to expect at such gatherings, plundering the database of our forthcoming Fetishistas Events Directory to provide an overview of this year’s Halloween fetish (or fetish-friendly) nights in the UK, Europe, Scandinavia, Australia, Canada and USA. Banner/cover image: Mistress Amrita at Torture Garden’s Halloween Ball, by MarcusT

Halloween, also known as Allhalloween, All Hallows’ Eve or All Saints Eve, provides many fetish event organisers with a great opportunity to host bigger and dressier-than-usual Fetish Halloween parties on or around October 31 each year.

These events are an obvious draw for many fetish and goth folk, who tend to have a natural interest in ‘darker things’ and already enjoy dressing up in special outfits for a fun night out.

For them, Fetish Halloween is a great excuse to ramp up the party style they already adopt for their other clubbing activities.

But the reason many fetish parties’ Halloween editions are bigger, more elaborate and more glamorous affairs is that these annual specials often purposely set out to attract a broader audience than the hosts’ regular fetish nights do.

Fetish Halloween nights can be a great chance for vanilla folk and the fetish-curious, who might normally be wary of going to a full-on fetish party, to dip their toes safely into kinkier waters.

For this one night of the year, they can play at being a public perv and interact with the fetish world without straying too far from their comfort zones.

Not surprisingly, therefore, the biggest, most successful Fetish Halloween nights are almost all crossover events, with dresscodes expanded to accommodate those whose wardrobes are not bulging with fetish gear but are nevertheless up for some dress-up fun and a light sprinkling of kinky spice.

Now it’s true that not all fetish folk are unreservedly enthusiastic about sharing a venue with visitors from the planet Vanilla at this time of year.

Some feel that large numbers of straight interlopers inevitably dilute the fetish vibe of the event.

Others complain that ’nillas don’t always know how to behave properly, being unacquainted with fetish etiquette and, fuelled by party spirit, more likely to invade pervs’ personal space in an unacceptable way.

But it’s worth remembering that the larger crowds these Fetish Halloween specials attract tend to facilitate a scaled-up event, often staged in a more impressive venue, and with more shows and other attractions for everyone to enjoy.

So there are also upsides to expanding the dresscode to accommodate more people once a year.

A couple of well known Halloween events aim to arrive at the same mix of cultures from a different starting point. They are first and foremost big ‘general’ Halloween parties, but make a point of specifically welcoming pervy people and are popular with the fetish crowd as a result.

At the opposite end of the partying spectrum at Halloween time are a number of smaller fetish events whose regular October or November dates fall so close to October 31 that it’s a no-brainer to theme them as Halloween specials.

Below you’ll find brief previews of a selection of this year’s Fetish Halloween events from around the world. The information is drawn from the global fetish event listings that will soon be freely accessible online with the launch of The Fetishistas Directory.

Since Halloween itself is inconsiderate enough to fall on a Wednesday this year, Fetish Halloween party hosts have once again had to choose between the weekend before and the weekend after to stage their events.

Our listings reveal that the vast majority of party promoters have opted for Saturday October 27. Just a few have chosen the following weekend, although significantly for London partygoers, one of these is Torture Garden on Friday November 2.

In the information below, we’ve also included a few fetish events that are not actually branded as Halloween parties but are happening on or close to popular Halloween party dates.

These events may still be ‘Halloween friendly’ — we advise checking things like dresscode with individual organisers if you’re considering attending.

A large number of fetish events now handle their ticket sales through third-party agencies like Eventbrite. Our listings below include some useful ticketing information but not usually details of the ticket agency itself. 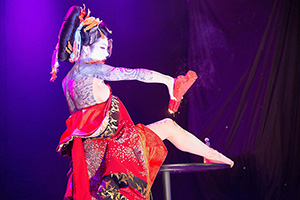 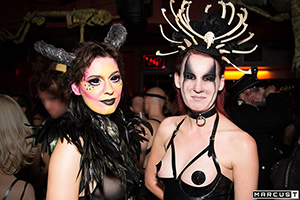 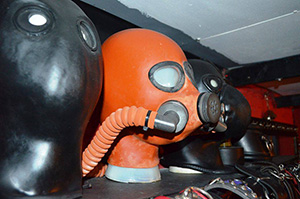 OTHER UK PARTIES
There are a few other UK fetish events that are taking place on dates close to Halloween, but are not being promoted specifically as Halloween parties. 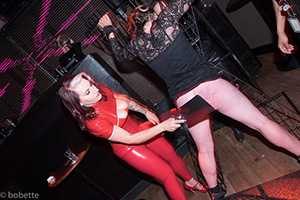 As long as you meet the dresscodes of these events, there would be nothing to stop you enhancing your outfit with Halloween touches if you felt inclined.

But if you’re doing that on the basis that you better not be the only person there who’s doing so, you’d be advised to contact the organisers in advance to find out how ‘Halloween friendly’ they intend their events to be!

On the weekend after Halloween, Mach2 holds its Autumn Event at a hotel near Gloucester (November 2-4) but you would definitely need to check in advance whether there’ll be any embrace of the spooky spirit at this fetish couples’ weekend! 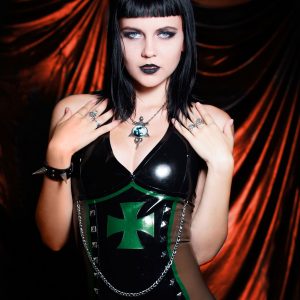 Ausrie Fel: latex with lashings of gothic, rock and metal style. Ausrie Fel is the name of a UK latex clothing brand and of the designer...