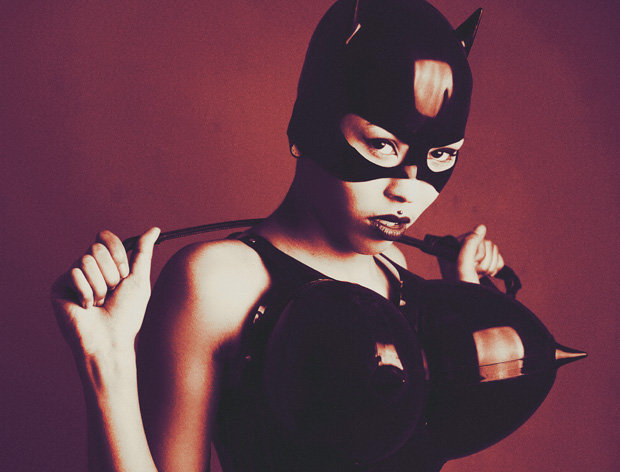 SELFIES: Abraxas models DeMask latex above, and HW-Design in the top banner (both pix: Abraxas)

Abraxas advice to newbies: if you want it, make it happen!

Abraxas, a striking-looking Amsterdam-based model and performer, has been making her own latex clothing almost as long as she’s been modelling. Recently she began developing a third set of skills as a photographer, shooting her designs on herself and other models to great effect

Though a relative newcomer to the fetish industry, Abraxas — aka Chaneequa Douglas — already had three years of modelling and two years of designing latex clothing under her belt by the time her career as a fetish model/performer really started taking off in 2012.

Having initially explored various different genres and concepts, she says she “evolved into a fetishist and fetish model” who “loves to be in front of the camera, just as much as being on stage for performances, shows and catwalks”.

Having worked in the last couple of years with “great photographers, designers, models, and make-up artists”, the Amsterdam-based model has already appeared in numerous shows, print and online magazines, websites, blogs, posters and other publications.

her focus has been on a new project: developing photography talents to add to the Abraxas skill set.

Ms Douglas admits that Abraxas the photographer is “just a newbie”. Nevertheless she has already been published in Kultur magazine’s latex issue 39.1 (with self-shot images), and Sinical magazines’s 2015 Europe Edition (“a great honour”) among other titles.

Through working as a photographer with “amazing models, designers, and make-up artist”, she reckons she has been able to build “a great portfolio in a short time”, and is grateful to all the creatives who have helped her come this far.

And she’s keen to keep developing the modelling side of her work. But she’s not just a pretty face.

A number of her creative collaborations have featured her own Abraxas latex designs, and she says she is often asked how she learned to make latex clothing. Her answer, she says, is simple. “If you want to do something, make it happen.”

The lady apparently made it happen with the help of her grandmother, who has been designing clothes for decades. “Learning tips and tricks from her was the best way to find out how to make perfect patterns for latex clothing,” she explains.

We’re guessing that granny probably wasn’t gluing too much latex herself, so that’s probably not the entire story. But not to worry: for the last few months,

In a recent collaboration with DeMask, she photographed herself dressed in a catgirl hood and torpedo-tits top, posing with a riding crop.

One of these shots (the first picture in this article’s Abraxas: Model gallery) took our fancy for a Fetishistas promo campaign. As a result, you’ll find a slice from this image appearing across this website promoting upcoming sister site The Fetishistas Directory.

Our thanks go to Miss Chaneequa Douglas for the use of this work. We hope you enjoy it — and the rest of her portfolio — as much as we have!

In a recent collaboration with DeMask, she photographed herself dressed in a catgirl hood and torpedo-tits top, posing with a riding crop – a shoot which took our fancy for a Fetishistas promo campaign

Also Published in Metro, Volkstrant, Telegraaf and other newspapers, and on the Official Vogue Website

2014 – All Zivity sets published so far have been chosen as Editor’s Pick, Including the Abraxas Photography sets.