Steve English, 30 years on: the man who made DeMask.

Steve English founded the business that became DeMask three decades ago. So when he attended its official 30th anniversary celebrations in Amsterdam, Tony Mitchell seized the chance to interview him about his years at the helm of a world-beating pervy brand. His is a story of thrills, spills and fetish firsts that dates from the very beginning of the modern scene. Our banner image of Steve is by ErikFoto and our scores of vintage pictures come courtesy of Steve and DeMask’s archives

Steve English is a name that, for many in the fetish world, is steeped in myth and legend stretching right back to the formative days of the modern scene.

English is the Brit who founded — and for 25 years ran — DeMask, the Amsterdam-based business he turned into the world’s largest fetish brand.

There are many reasons to consider him a pioneer. His numerous fetish firsts range from design innovations like the multi-panel rubber hood to revolutionary production methods such as the (pre-laser) use of die-stamping machines for bulk pattern-cutting.

With his trusted inner circle, he built a formidable manufacturing division that, at its peak, employed more than 60 people; developed a wholesaling operation that supplied almost every major fetish store; and established a clutch of DeMask retail shops stretching from Nuremberg to New York.

Not bad for a bloke from Derby who started out making rubber clothes in a shed at the bottom of his garden.

I’ve known him since the mid-’80s, but hadn’t seen him for quite some time until we both turned up in Amsterdam for DeMask’s 30th birthday celebrations at EuroPerve Resurrection V, the party hosted by his erstwhile colleagues Anton and Louva, DeMask’s current owners.

Happily for me he agreed to be interviewed, and we met up for our chat in the little flat he has kept on in Zeedijk. It’s just a few doors from the original DeMask store, which, he points out, still boasts the interior décor he created all those years ago using his Chinese lacquering skills.

People familiar with that Zeedijk store, which opened in the summer of 1990, usually assume it was Steve’s first fetish shop. More accurately, it was his first shop under the name of DeMask.

He had actually established the business four years earlier with a store called DeMasque in Den Haag. He and girlfriend Fiona had relocated there from the UK after starting their first latex business, called Berlin, in his garden workshop.

In Den Haag they had been joined by a couple of their Derby colleagues including Darren Barrett, remembered by many as a colourful figure from DeMask’s early years, who sadly died shortly before the 30th anniversary celebrations. 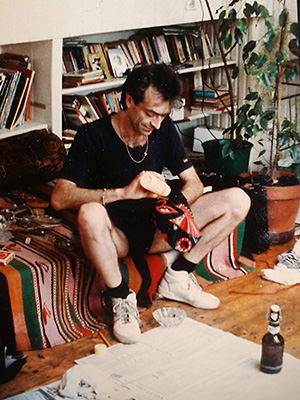 But a week before the DeMasque shop on Hugo De Grootstraat was due to open, Steve found himself unavoidably obligated to return to the UK, leaving Fiona to open and run the shop without him.

“She kept it going for almost the full three years I was away,” he explains. “But not long before I was due to come back, I got a ‘Dear John’ letter saying ‘the business is up the spout and I no longer want to be your wife’.

“But to give Fiona her due,” he adds, “she put all the assets into storage and kept paying the storage fee for two or three months until I came back out to Den Haag.”

Cleaning up in Amsterdam

Once back in the Netherlands, Steve immediately began looking for a new business location. At that time (1989), the authorities in Amsterdam were engaged in a major clean-up and redevelopment of the city’s run-down, junkie-riddled Zeedijk area.

They were “doing blocks at a time”, and the block including what is now the DeMask shop at Zeedijk 64 was the first to be finished.

To attract new businesses, post-completion grants of 30 percent of building costs were available from the City. And at a meeting with ABN bank, Steve used his earlier DeMasque promo material to help secure an additional bank loan of 30,000 guilders.

All that remained now was to turn the premises — a mere shell of bare walls with a rough concrete floor, no electrics, no plumbing and no plasterwork — into a viable retail environment.

“It took maybe nine months to finish and decorate the place. I did it all myself,” says Steve.

Eleven months after the shop opening on June 24, 1990 came the first of DeMask’s Europerve parties — an event that would quickly acquire a rather useful notoriety.

The first Europerve party helped create a template for other international fetish parties that followed, including the Skin Two Rubber Ball

But the event he co-hosted with us Skin Two folk on Saturday May 18, 1991 at the Artis Zoo was the first held under the name Europerve.

That party helped created a template for other international fetish events that followed, including our first Skin Two Rubber Ball at Hammersmith Palais in November 1992.

Steve was responsible for all Europerve’s local arrangements. But given that in 1991 there were no real precedents for an event of this kind, where did his ideas about what constituted a good international fetish party come from?

“I was just basically following my instincts, what I thought would work,” he reckons. “And it did, I ’spose, didn’t it?. People came from all over the world: Singapore, Australia, America…

Among that party’s guests had been Marina Mowatt — daughter of Britain’s Princess Alexandra and then about 28th in line to the throne — and her photographer husband Paul.

Soon after the party, we published Issue 11 of Skin Two, including a last-minute report on Europerve complete with Tim Woodward’s picture of Steve chatting with Marina at the event.

That picture was lifted by the News of the World to provide the ‘money shot’ supporting its front-page story about royals caught indulging in pervy partying.

‘I hadn’t known who these people were. They came into the shop before the party and I chatted with them. I just knew them as Paul and Marina’

And quite a few people who considered Steve English to be pretty media-savvy thought he had set the whole thing up. So — had he?

“No, no, it was a total surprise,” Steve insists. “It was a Sunday afternoon, I was still in bed here at the flat, and Joe [DeMask production manager] rings the doorbell, I let him in and he says ‘I’ve just been down to Central Station, walking past the newsstand, and I saw this’.

“I hadn’t known who these people were. They just came into the shop on the Friday before the party and I got chatting with them. I just knew them as Paul and Marina.

“They were nice people and they spent some money, but I didn’t know who they were until the Sunday when the newspaper hit me over the head!

“But all publicity’s good publicity isn’t it? That was a real coup. It was a major boost both for the parties and the clothing company.”

And, adds Steve, the subsequent success of the clothing operation largely rode on the back of the parties. And on the business put its way by one big German retailer — LGS.

LGS (Leder Gummi Studio) was then, and still is, one of the world’s largest bricks-and-mortar fetish stores, located in Gelsenkirchen, not far from Essen where Fetish Evolution Weekends are held.

The relationship with the giant store began after copies of DeMask’s first print catalogue, the Mask Collection, were sent out to all fetish retailers across Europe.

(Ever the autodidact, Steve had mastered QuarkXPress and Photoshop so he could do all the catalogue design work himself, just as he had earlier taught himself to cut patterns and glue rubber in order to make clothes.)

A postcard from the edge

“I received this little postcard — I’ve still got it somewhere — with a German stamp on it and a message in German that translated as: ‘We’ve just got your catalogue and we want one of everything in every size and every colour’.

The card was, of course, from LGS, and Steve remembers thinking, “Wow — every size, every colour, every model! That really put us on the road to financial stability.”

I tell Steve I’ve seen small fetish labels caught out by ostensibly great news of this kind. It can easily create a crisis if they don’t have the capacity to produce an unexpectedly large order quickly.

“Well it did for us too. We had the workshop down in the basement of the Zeedijk shop with just the one big table and a few little tables around. I think there were eight or nine people down there all fighting for space on a table!”

The immediate solution was to get a new workshop “in the red light district down an alleyway”. And after about a year, it moved to a larger space on Oudezijds Kolk where today you’ll find Molly Malone’s Irish pub.

I suggest to Steve that, even with that number of staff, DeMask would still have been, at that time, one of the largest employers in the fetish clothing industry.

“Well they were all on 25 guilders a day, and a beer and a bag of chips in the evening,” he quips.

“Half of them didn’t used to turn up till halfway through the afternoon. Some used to turn up at about seven in the evening. Crudelia [a gentleman of somewhat vampyrical appearance] didn’t turn up until it was dark, until he’d got out of the coffin he used to sleep in.”

An important element in the success of DeMask under Steve English was the strong design style he imposed on the brand.

The influence of vintage 1950s fetish cartoon art — present in the work of a number of latex designers — can be detected in many classic DeMask creations.

But there was another inspiration from the more immediate past that really (ahem) cemented the distinctiveness of Steve’s design approach.

And that was AtomAge, John Sutcliffe’s famous London-based fetish clothing and publishing company.

Launched in 1957, Atomage dominated British fetish culture during the 1960s and ’70s, and in fact up to the early-mid 1980s when the arrival of Skin Two finally ushered in a new fetish fashion/clubbing era.

If you look now at the pictures in Sutcliffe’s magazines and catalogues, the photography was pretty amateurish and the fit and finish of the clothes hardly comparable with the standard we see from designers today.

Click previews for DeMask Mask, Corsetry & Lingerie, Bizarre Rubber and Mistress catalogue galleries.
Click on any individual thumbnail in each gallery to begin a slideshow of all full-size images 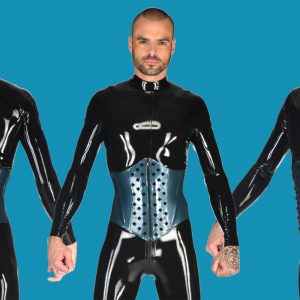