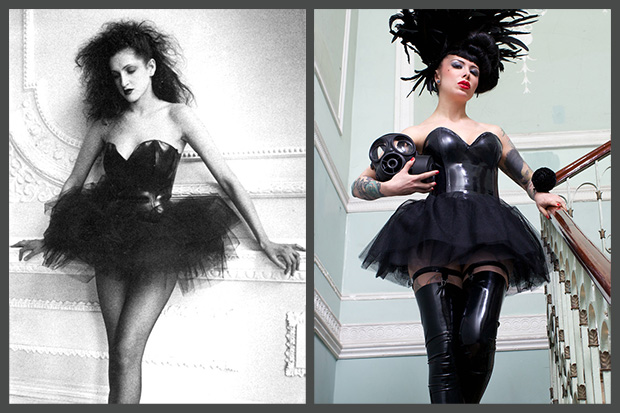 THEN AND NOW: Tutu from Krystina’s first EctoMorph collection photographed left, in 1985, by Derek Ridgers; and right, reshot in 2012 by Grant Ibtasama Masruuq

It started, says the label’s creator Krystina Kitsis, as an experiment born out of a casual conversation she had at London’s Club Maitresse (successor to the original Skin Two Club) in 1984.

“I had first gone to Skin Two with a model friend, Sue Scadding, who knew the club’s proprietor David Claridge, the man behind Roland Rat.

“There I met Tony Mitchell and Tim Woodward who were to become seminal figures in my life.” [Don’t make me blush — Ed.]

Krystina told Tim that she thought the fetish clothing scene was ripe for a fashion makeover, and shortly afterwards began her first experiments with making latex garments at home.

The following year, she and her then partner suggested to Tim (who had by then acquired the rights to the Skin Two name) that they organise a ‘rubber ball’ together. He agreed, and it was held in October 1985 at Mayfair’s well-known Embassy Club in Bond Street.

To many people’s surprise the event got positive coverage in the serious newspapers. Krystina credits this with “starting the passage of fetish from underground subculture to the mainstream position it occupies today”.

After the success of this first Rubber Ball, Krystina helped Tim organise new regular Skin Two club nights, but gave it up after a couple of years to concentrate on EctoMorph. The club-hosting period had left her with “strong memories of carving out a niche for a wide range of people driven by the need to have somewhere social to wear latex”.

However, this was Thatcher’s Britain and people trying to put on fetish nights in London’s West End encountered a lot of opposition from the police and local authorities in Westminster, who wanted to clean up Soho.

“One consequence of this was that the huge event we had organised at Peter Stringfellow’s Hippodrome Club, with fashion show, pony girls and bands, was cancelled by the venue at the last minute.”

Thankfully, she notes, clubs now are more varied and there is much more choice about dresscodes and sexual orientation (although fetish events in Westminster are still a no-no).

Krystina launched her first EctoMorph collection at that first Rubber Ball at the Embassy. A fashion graduate of St Martins who went on to research cultural history at the Royal College of Art, she found the process of making latex clothes quite difficult to begin with.

“Not being a ‘born a fetishist’,” she says, “I found the smell of latex unusual and somewhat imposing. Now I can’t even smell rubber, although it is the overriding scent in my home, which is also my workplace.”

Vivienne Westwood and Malcolm McClaren were huge inspirational figures for Krystina during the years (1978-80) she was at St Martins, which at that time was based in a building “around the corner from seedy Soho where punks, prostitutes and pimps walked the streets”, she recalls.

“I had been at St Martin’s during the flourishing of punk and the beginnings of the New Romantic era, and these twin influences fuelled my creative juices.

“I was fascinated by subcultures, and at that time also met Derek Ridgers who was a regular figure at nightclubs photographing interesting people. He was one of the first to photograph my collections.”

A year after graduating with a BA Hons in Fashion and Textiles, she began an MA research degree in Cultural History at the Royal College of Art.

“My time at the Royal College was spent studying the history of fashion photography, and for a time after I

left, I lectured on fashion photography. It has always been an important part of my creative development.

“They say that behind very great man is a great woman. In my world there was always a great photographer with whom I collaborated to produce innovative images.

At the same time, at an art show private view, she met someone who would become another influential figure in her life.

Iain Henderson owned a boutique called Quasimodo on the Kings Road, and he offered Krystina display space there if she would put into production the latex collection she had launched at the Embassy night.

Thus EctoMorph began as a proper business — born, as Krystina puts it, out of a desire to take latex out of the closet and into the realms of fashion.

“Quasimodo was a haven for quirky and sexy clothing, and its clientèle was a combination of the famous and young street kids who just wanted to be different.”

Iain employed Page Three girls (newspaper pin-up models) to run the shop, which resulted in a lot of coverage in the red-top dailies. Editorial spreads featuring such models and soap stars not only helped sales but also made fetish more familiar and acceptable to the general public.

“This series of serendipitous events spiralled my ascent into fetish,” Krystina says. “What started as a naïve experimental idea became a lifestyle from which I have never looked back.”

Her starting point in 1985 was propelled by the desire to overturn a scene governed by tradition and characterised by “staid catsuits made in the main by Sealwear”. It was a scene as yet untouched by fashion concepts.

‘My first collection was in white latex, which I thought would be less threatening. Ironically, Vogue and Elle mags chose simple black dresses to feature’

“I knew the industry was ripe for an overhaul. My first collection was in white latex. I introduced the peplum-shaped jacket, then an unknown concept in latex design. I chose white because I thought it would be received better and be less threatening.

“Ironically when I was approached by Vogue and Elle magazines they chose simple black dresses to feature. But the gateway was open and fetish was never viewed in the same way again.”

EctoMorph was a concept coined from the designer’s fascination with photographer Robert Mapplethorpe and the 1980s’ obsession with the body.

“I also loved the body-hugging clothes of Azzedine Alaïa and I wanted to replicate that aura in latex. Ectomorph is one of three biological body types — the ideal: a slim, tall body type.

“At the same time I wanted my clothes to merge in with daily reality and seem ‘normal’ so I stitched my latex, using it as one would ‘normal’ clothing fabrics.”

She recalls that some people assumed it was leather because it resembled leather from a distance, and that was most people’s only kinky reference point.

When she exhibited at Fashion Week, she recalls buyers feeling the latex then sniggering “Who on earth wears that?” at the clothes.

But her stitching of rubber became her trademark, along with the stud detailing with which she peppered many of her garments.

“I was determined to incorporate and change the image of fetish menswear, and designed a fashionable biker’s jacket and Levi’s-inspired jeans that got included in the Street Style exhibition in 1989 at the V&A.

“They, along with my men’s shirts, became best-selling items for men. However, most men that I design for now are crossdressers or incorporate an element of femininity into their fetish wardrobe. Things have certainly changed for men,” she observes. 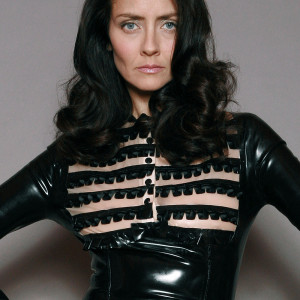 ‘Latex is now the preferred fabric of the rich and famous, and no long the preserve of an underground, secret, hidden...