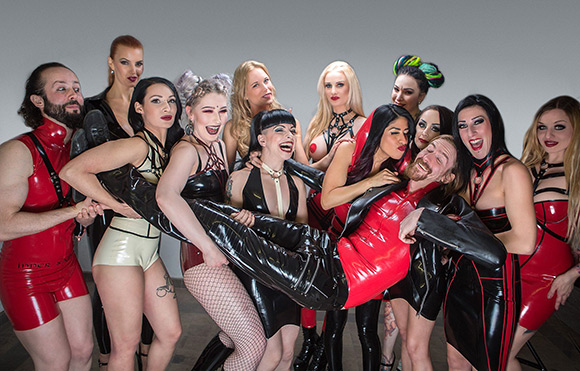 The December date — occasioned by a double-booking at the weekend’s regular venue on the outskirts of Amsterdam — was a one-time change in 2016.

But the internal timetable rearrangements that were also introduced last year have been retained more or less intact for this year’s edition.

These Friday events both again take place at the party venue, A9 Studios. Prior to 2016, the Dinner took place at the A9’s ‘club within a club’ area but has since been moved to A9 Studios’ main auditorium.

And the Meet & Greet used to be in the event hotel (the Van der Valk Akersloot, not far from the party venue) but has now moved to the gallery overlooking the main auditorium at A9 Studios.

For members of the public attending the weekend, this moving around of individual events within the overall programme probably won’t make too much difference.

But not all of last year’s industry participants were happy with the changes, and one wonders how much effect this might have on industry involvement in this year’s event.

But it would be surprising if the involvement of the numerous fetish designers and fetish models enlisted for the Munich event’s debut were to make no dent at all in industry participation at this year’s Dutch weekend.

Given the German latex label’s enduring support for the Dutch weekend both with catwalk appearances and after parties, its choice as this year’s sole fashion show provider will have been an easy one to make.

Most latex labels simply don’t have the resources to attempt a double act of this kind. But if anyone were going to try, it would be Inner Sanctum’s tireless showman boss, Max Kuhl.

Perhaps we should start by clearing up a misunder- standing about the involvement of one particular fetish celebrity.

Canadian fetish queen Bianca Beauchamp will be participating in this year’s event.

Unfortunately, however, Bianca won’t be attending. But a fellow Québébecois — the singer Gabriel Langelier — will feature prominently, both as host and presenter of a fetish opera show at the Dinner on Friday November 10..

The dinner cabaret will also feature the return of rising Portuguese star Louise L’Amour (see banner image above) who this year will be presenting what’s described as a ‘spectacular’ aerial show.

And we’re told there’ll be another specially created fetish dance performance by Amsterdam Ballet dancers too.

Promotion of this year’s awards has been rather patchy, and at publication time, no information had been provided to us about Miss Fetish Europe nominees.

However, Best Up & Coming Fetish Model nominees have been announced.

If last year’s layout at A9 Studios is repeated, the MM&G will happen in the gallery area overlooking the auditorium where the dinner and shows take place.

Mistress Manita’s Showboat play party in Zaandijk the same night goes on until 4am, so for those seeking an opportunity to play, it is feasible to attend both. Showboat tickets cost €40 and hopefully there’ll be a shuttle service between the two venues.

As previously mentioned, there is just one fashion show this year, by Inner Sanctum. However, the organisers do promise “new décor, a new and larger play area and various live performances”, as yet unspecified.

The DJ line-up features REM, Marcello Dimitrijevic, Brasco, Ruben Vitales and Renji on the main stage; Mally Clark and Ramon Baron in Area 2; and Statik Sky and Anoxemia in the Alt area.

Final event of the weekend, the Area 51 After Party, is a small-scale invitation-only affair. But while it‘s primarily for industry folk, other suitable-looking people might also find themselves gifted with a ticket. So dress to impress!

Last year’s new early evening start on Friday reduced travel options for those wanting to attend the new first event of the weekend, and consequently some models (including awards winners) turned up late or not at all.

Some also couldn’t make it because the unfortunate one-off December date clashed with important exam schedules.

But on the plus side, the new Friday dinner set-up in the main party auditorium was much more atmospheric than the brightly-lit space previously used, and the high stage made it easier for diners to enjoy the cabaret shows.

GALLERY 2 (below, upper right) offers a small flavour of the Models Meet & Greet which, new for 2016, followed on from the dinner, and took place in the gallery overlooking the auditorium that had housed the dinner.

It would almost certainly have been more vibrant had a full complement of models been able to attend. But with or without them, this new, smallish L-shaped space was hardly a match for the big room in the hotel where the MM&G had previously kicked off the whole weekend.

GALLERY 3 (below, lower left) was shot mainly backstage, before, between and after 2016’s four fashion shows.

It depicts a selection of the models participating in the evening’s four shows by Chronomatic, Iris Thespider, Inner Sanctum and House of Harlot.

You will also spot the brands’ owners — Carina, Iris Trika and Max Kuhl respectively — and various other unsuspecting industry folk who

wondered into or close enough to the changing area to be dragged before the camera.

Echoing the new Meet & Greet space, the backstage area in 2016 was much smaller than the previous large changing room, whose opulent décor and lighting had provided such a good backdrop for candid photography.

The original plan for 2016 had been to split Saturday night’s fashion shows into two sets, with the two smaller labels appearing during a new, early evening pre-party in the big auditorium.

This was to be followed directly by the main party, with the two established brands taking to the catwalk later on.

The pre-party was supposed to have ‘standing tables’ in the style of the original Meet & Greet room at the hotel, and there was even talk of snacks.

At the bewilderingly early kick-off time of the new pre-party, these promised features had not materialised, and neither had more than a smattering of partygoers.

Fortunately, sanity eventually prevailed, and the two early fashion shows were rescheduled to take place nearer to the time when audiences actually expect parties to be in full swing and shows to be happening.

Three sideshows were also hosted during the evening by Kink Info on what came to be known as the Black Stage.

The location in question wasn’t actually a stage: just a small area of upstairs gallery floorspace near the entrances to the Play and VIP areas.

Black it certainly was, though, since no lighting was provided, meaning little of the action could be seen except when photographers’ flashes were firing. None of this, it must be said, was the fault of Kink Info, who made the best of what they were given.

The performances were a sub-dom scenario enacted by Miss Mirjana and two playmates; a RopeMarks bondage performance; and a rope suspension featuring Bob RopeMarks’ ex-partner Dutch Dame, making her debut as a rigger with Xander Hoose as her willing victim. 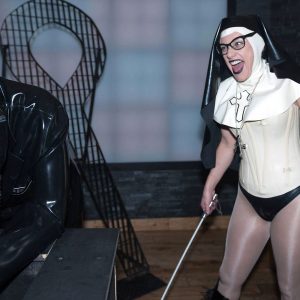