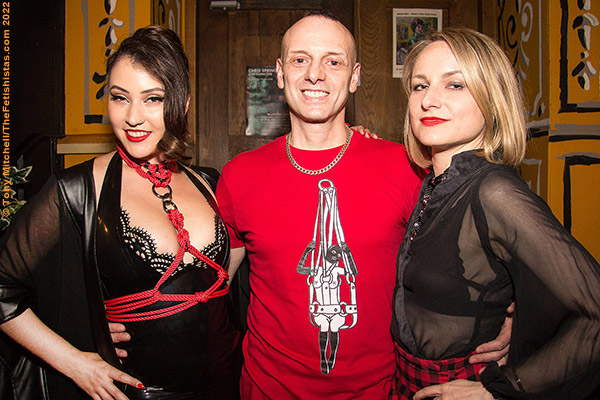 JUNE COVER STORY: June 10’s Circa Party – known formally as the Circa Press Summer Party – started out as a promo for Circa photo-book authors Ifa Brand and Vestholm that included a fashion show by latex designer Nina Doroushi and burlesque performance by Talulah Blue. However, it ended up as the first public event in London Fashion Week after Circa boss David Jenkins sponsored Nina to be a part of that esteemed programme. Held at Vout-O-Reenee’s club near the Tower of London, it attracted people from the fashion and fetish scenes plus a pavement protest by a devout Catholic prayer group! Report and all pictures: Tony Mitchell.
Banner image: latex designer Nina Doroushi (right) with model Miriam Veil

Having managed to return unscathed from five days of unmasked fetish partying in Berlin at the end of May, and to stay well away from the Jubilee celebrations in London, I was initially a little anxious about joining the Circa Press Summer Party last Friday, June 10.

Due to take place in Vout-O-Reenee’s, a small club in a converted church crypt in London’s Tower Hill, and with a guestlist that had already maxed-out by June 1, it could, I feared, be considered by the covidly anxious as a potential superspreader event.

But then, I reasoned, so too could most of the events I had just attended in Berlin.

There were already some substantial incentives to be there. They included the chance to mingle with Circa’s fetish photo-book authors Ifa Brand and Vestholm, fetish scenesters Psycatt, Anna Kii and Max Deviant, and my old pal Kate London who would be MC-ing (among other things).

But two new factors helped nudge me towards a firm commitment to attend.

First, some of God’s representatives on earth decided they should stage a demo against the Circa party on the steps of the church under which Vout-O-Renee’s is situated. Wouldn’t have wanted to miss that!

And second, the Circa event received an unexpected promotion to the status of ‘first public event of London Fashion Week’, as a result of Circa boss David Jenkins sponsoring latex designer Nina Doroushi, who was due to provide the party’s fashion show for her Velvet and Steel collection.

Now they were determined to be offended anew by what they inaccurately characterised as a “fetish event” taking place beneath one of their holy shrines, the Church of the English Martyrs.

On the sound principle that trying to ban an event is the best possible way to ensure overflowing attendance, this would have been literally a Godsend, were Circa having difficulty filling the venue.

But it was already oversubscribed ten days beforehand, so this time the prayer group succeeded neither in preventing anyone attending nor in guaranteeing an even bigger crowd.

I had hoped on arrival to at least be forced to run the gauntlet of an angry mob of protesters channelling the wrath of God in my general direction.

But disappointingly, I just walked straight past the little group praying on the church steps, descended the stairs to the club’s front door, presented myself to the aforementioned Kate, and entered the premises. 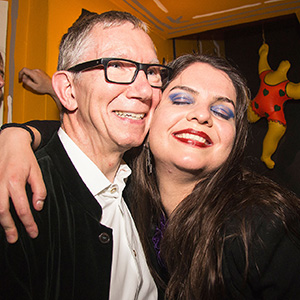 Vout-O-Reenee’s is a cosy place with an entrance lobby, a central bar/lounge area with a couple of nooks off to the sides, and a long brightly lit hall —  the club’s Stash Gallery — where work by Ifa Brand and Vestholm is on exhibition until June 15.

When I arrived, the dark ‘clubby’ areas of the venue were already well occupied, but the gallery space was more or less empty.

The gallery entrance was largely blocked by photographers and video people, who’d set up their equipment pointing down the gallery, in anticipation of the promised Nina Doroushi latex fashion show.

It was not, however, the easiest for me to photograph. I had to wait for the models to burst through the media wall, then do my best to shoot them as they passed through the lobby into the bar and then back out into the lobby again.

So my apologies if you see some odd angles in the galleries below!

Kudos, by the way, to Ifa Brand. Despite being at the event as Circa author and photographic contributor to the Stash gallery exhibition, she stepped in and modelled latex for Nina when one of the designer’s original models dropped out late in the day! 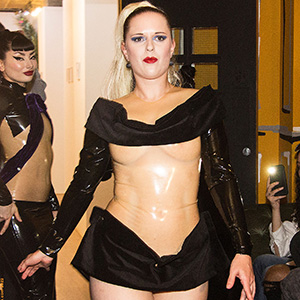 Friday’s crowd was a largely agreeable hybrid of fashion, fetish and arty types.

Some of my latex designer friends have been known to complain that mainstream fashion steals looks from the latex scene’s specialist producers, and that fashion folk can be very sniffy about the idea of latex as legitimate fashion.

But fashionistas I chatted with on Friday seemed genuinely interested in Nina’s work and were aware of the impact on our culture of clubs like Torture Garden. So there’s hope yet!

Trying to photograph the performance of burlesque artist Talulah Blue, who followed the fashion show, was more difficult than shooting the fashion, since she did most of her performance in the bar area.

At one point I provided unintended comedy by rushing towards her to get a shot at the exact moment she turned and headed back towards me. How we failed to crash into each other I don’t know.

I have included a shot of her apparently doing a personal turn for David Jenkins, which I’m sure he enjoyed!

My award for the evening’s most stimulating conversation went to a latex-clad visitor from Berlin by the name of Maxie. Not only was she the first audience member I spotted dressed in rubber, but this party was apparently the first time she’d worn it.

A friend of David Jenkins, she mentioned that she had just been at the GFB Weekend’s opening Kinky Cocktails party in Berlin, but had subsequently opted for more play-orientated gatherings at venues like Insomnia.

Despite the latex, she said she didn’t consider herself a fetishist because she didn’t have a specific sexual attraction for rubber or any other fabric.

After she had listed numerous kinky things she had done that she didn’t consider fetishistic, I concluded that she was relying too much on the traditional Freudian definition of fetish, which doesn’t accommodate the broader meanings evolved over the 40 years of our modern kink culture. But her straighforwardness was priceless.

Kudos also goes to Kate London, who excelled at her various duties including announcing the shows and trying to encourage the performance music to play at a more audible level on the venue’s modest sound system.

All in all, the Circa Press Summer Party was a fun evening. It exposed a lot of us not only to a promising latex designer, a seasoned burlesquer and two very different styles of arty fetish photography, but also to a rather different mix of people from those to be found in our usual clubbing haunts.

When I took my leave, the prayer group was still at it upstairs, and had even managed to engage in conversation some people who’d left just before me. It all seemed remarkably civilised for a protest.

But by Sunday, Ifa Brand was commenting on Facebook that someone on Twitter had posted that her images were ‘blasphemous’.

I’m reliably informed that Ifa has taken this as a compliment and is even now working on “new plans for more sacrilegious imagery”.

BELOW: Circa Party People and Shows by Nina Doroushi & Talulah Blue (photos: Tony Mitchell)
CLICK/TAP on a preview to open its gallery, then click/tap on any thumbnail to start slideshow 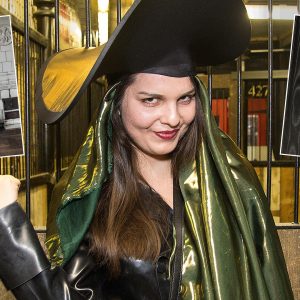