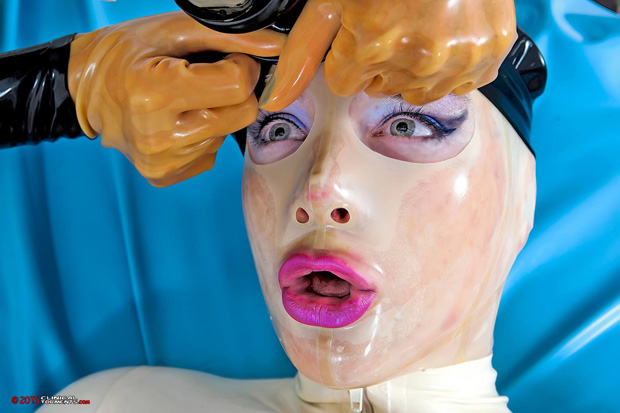 Cynth Icorn is a young, multi-talented star of the London and international fetish and alt-cabaret scenes. A graduate of St Martin’s and co-founder of strict latex dresscode night Rubber Cult, she combines club-running with modelling and performing in multiple genres. From her rubber slavegirl work for European pay sites to cabaret performances for Torture Garden and Cirque le Soir, Tony Mitchell learns about her unique approach to all things fetish, including her new, solo clubbing venture Psycho Ward

Cynth Icorn is a young, London-based kinkster who, in a relatively short time, has made a major impact on the fetish scene.

While the description ‘unique’ is probably overused to describe fetish talents, it’s hard to find a better word to describe Cynth’s contribution to the culture.

This is partly because of the total, immersive dedication with which she undertakes every project — be it as a club promoter, model, performer or paysite slavegirl.

And partly because, as well as being a serious perv, she is also a serious artist, with a BA in Fine Art from University of London’s famous Central St Martin’s School of Art.

She maintains a professional distinction between her gallery-based work (done under her real name), and the rest of her oeuvre, undertaken as Cynth Icorn (aka Synth/Synthicorn on Facebook). It’s the latter this interview is concerned with.

One not-insignificant part of her USP is that all her modelling work is done while masked. So you may already know her as a scene actor without even realising it.

Or you may have come to recognise her by her distinctive costuming style, or by the events and fetish brands with which she is most closely associated.

Chief among the latter at this point is Rubber Cult, the strict latex dresscode night she created with Miss Kim of Club Rub and photographer Jan Fetishclubpix back in September 2012.

She also frequently performs at other people’s clubs, not least Torture Garden, and is a resident performer at Cirque le Soir, the upmarket, circus-themed London nightclub that hosts events around the world.

And recently, she launched her first solo night, Psycho Ward — a medical fetish night ‘with a difference’ at Resistance Gallery in Bethnal Green.

However, for those not au fait with the London clubbing scene, she may be better known as a latex slave girl on various fetish paysites.

She does regular shoots in Tenerife for Kink Canary sites such as Clinical Torments and Freaks Inside, and has co-starred in some equally rubbery sessions with Anna Rose at Alterpic.

Cynth does regular shoots in Tenerife for Kink Canary’s Clinical Torments and Freaks Inside, and has co-starred in equally rubbery sessions with Alterpic’s Anna Rose

But how did it all start for Cynthia Icorn? Has she always been a perv?

“All my life. My Barbies had whip marks drawn on their backs with my first lipsticks!” she laughs.

She reckons she’s one of the fortunate products of feminist and post-feminist child-rearing, where there is “more of a prevalence of young women who’ve been brought up without being told they can’t do things, or not being shamed for doing things”.

Growing up in neither a really eccentric nor a really strict family, she says she just had a “very accepting” space. “Even better really,” she concludes.

“That way you’re not doing anything in a reactionary way — you’re doing it because it interests you.”

For the 15-year-old Cynth Icorn, a key affirmation of her interests came with her discovery of Bizarre magazine.

“I remember seeing pony play and stuff in Bizarre, and reading about hook suspension for the first time, and going, ‘I need to see that, I wanna do that’.

“I was a little rock-goth kid, and I’d gone from Kerrang! to Bizarre. I used to cut out weird and interesting things from Kerrang! and from girls’ mags and put it all up on my wall.

“But Bizarre was the first magazine that let me know of other people doing it, and really know about the fetish scene.”

So when did Cynth’s sense of wanting to be an artist begin to emerge? She traces it back to secondary school, where she did her art GCSE and studied art textiles, then took A-Levels in art, philosophy and psychology.

Hailing from England’s south coast, the young Cynth had already made a pilgrimage to London and her first fetish event before moving to the capital as a student. She celebrated her 18th birthday at Club AntiChrist.

“Being a little goth girl, AntiChrist sounded like my dream. The description of the different themed rooms, free sweets, free cake, the dark room, the dungeon… I loved it.

“I saw AMF Korsets doing their hook suspension show! To see that at my first fetish event was such a fortunate thing, because they don’t do them very regularly.

“One of the things I always remember from that night with resounding clarity is this idea of a space where everything that might have ‘othered’ me at home was something that was celebrated within this space.”

It also provided her first taste of being on a fetish guestlist. “Well you know — if you turn up dressed as a unicorn, with full pony boots, then you are bringing something to the event!”

Cynth says she felt from the start that London was going to be a nurturing place for her as a perv. However, integration of fetishist and artist did not begin immediately upon her arrival at St Martin’s in 2009.

It seems her peers at secondary school had been none too accepting of her, and this had made her more cautious about revealing everything, despite being “quite an open person”.

“Coming to St Martin’s and having the freedom to make things in a less guided and restricted way than previously, I didn’t immediately go to the cabaret costume route I’m at now.

“In my foundation year I was still being quite experimental with different media and wasn’t working strictly in performance at that point. I was quite out about what I was into, but I wasn’t trying to push it into my practice.”

She remembers, during the first year of her degree, putting pictures of her clubbing costumes and fetish play activities up on her studio wall.

It was done in the hope of initiating a conversation with her tutor about whether this could be considered work. “But I was too shy to vocalise it properly,” she admits.

“So it wasn’t until the end of my degree, when I’d already been working professionally in cabaret and had already set up Rubber Cult, that I had tutors who got what I was doing enough to say ‘Oh, you’re doing Leigh Bowery’ or ‘Oh, it’s Gina Pane’. They like to have something to relate it to.”

Before her foundation year at St Martin’s, the young Cynth Icorn had been unaware of the reputation of the establishment that had accepted her as a student.

She knew designers she admired such as McQueen and Galliano had been there. But at the time, it was more important that it offered a foundation year that would allow her to “do art and art textiles and fashion for a bit longer, just to work out where I wanted to be”.

It was only when she talked to other students that she began to develop a sense of the privilege that getting into St Martin’s represented.

“But,” she points out, “you’re also aware of disprivilege. Because it was the first time I’d come into contact with super-rich people — international students who spent money on champagne and tattoos and had allowances.”

As a St Martin’s student, she soon began making connections in the fetish world. She had met Jan Fetishclubpix at her first fetish club; he’d photographed her, they’d become friends, and through him she started to meet other people working on the scene.

“The people I was identifying with and making friends with were people who were involved. So working on the scene, both as a fetish model and performer, was a fairly naturally development after that.”

Desiring to be photographed on her club visits and have the pictures appear on the clubs’ websites, she quickly figured this meant “having the best outfit”. Which meant finding innovative ways of making those outfits.

“So it was very costume-driven, and as a fetishist, the costumes came out of my own interests. Rather than ‘Ooh, I’m going to theme something around Clockwork Orange’. It was always about what I could make with what I’d got.” 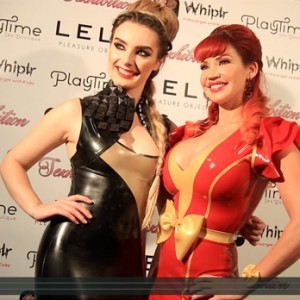